Chantage the next movie of Richard J. Arens

by La rédaction
in Cinéma
0 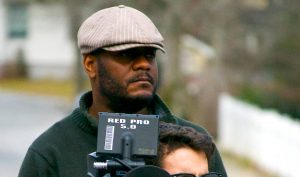 after more than ten years of absence, the Haitian director Richard J. Arenx, is returned to us with Chantage , a film that is insnovored in in the field of the haitian cinema.

You may not know Richard J. Arens but you probably have watched Alelouya, chomeco, show kola, or my name Is,m. All these movies that are now part of the Haitian folklore have been made by one and the same person, Richard J. Arens.
Richard J. Arens is a Haitian director who, after having had a brilliant career in Haiti, left the country in the spring of 2007 to settle in the United States. He later integrated the New York Film Academy School (NYFA), to complete its cinematographic knowledge. And as a project output, he wrote, produced and realized the film Chantage, a dramatic comedy of 68 min that is currently available on Amazon Prime, a small move for the director and for the country. The film Chantage tells the story of Francine, a beautiful woman who left her husband and daughter for a man (James), more beautiful, richer or at least that’s what she thought. He was revealed that James was actually a crook that had after her money.

Mains and Haitian customs are themes that are very expensive to the director who now occurs of presentation. In Chomeco (with actors Daphnee Weeneus, Rachelle Saturday, Simon Innocent, Roberto Colas, Glajimmy Chery), he denounces endemic unemployment. A phenomenon that ravages the Haitian society and mainly affects the youth. In Alelouya (with Glajimmy Chery, Richardson Louis, Heandel Dorfeuil, Hugetu Saint Husk, Frantz laraque, Renald Sunday), he tells the story of two men, two friends, two crooks, who are passing for pastors. These two films were acclaimed by criticism at the time, both for their scenario and for the play of actors in particular Glajimmy Chery, the star player in both films. In My Name is …, an erotic thriller released in 2007, including Shudson Boursiquot and Laina Regalat, the director has impregnated the Haitian cinema of a new touch which would change the appearance of the seventh art in the Republic of Haiti. Amazon has become for the last years the privileged choice of several screenwriters. Bruno Mourral presented his movie Kafou, Robinson Lauvince will present his first dramatic series Loyal-T.

Chantage , the expansion of a period of 68 minutes with for major players Nina Vivaci, John R. Toon, Abby Lindsay, Glajimmy Chery (this is the 5th collaboration of the actor with the producer). Chantage is available right now on Amazon Prime.
Carlens Laguerre
Twitter: @l_carlens